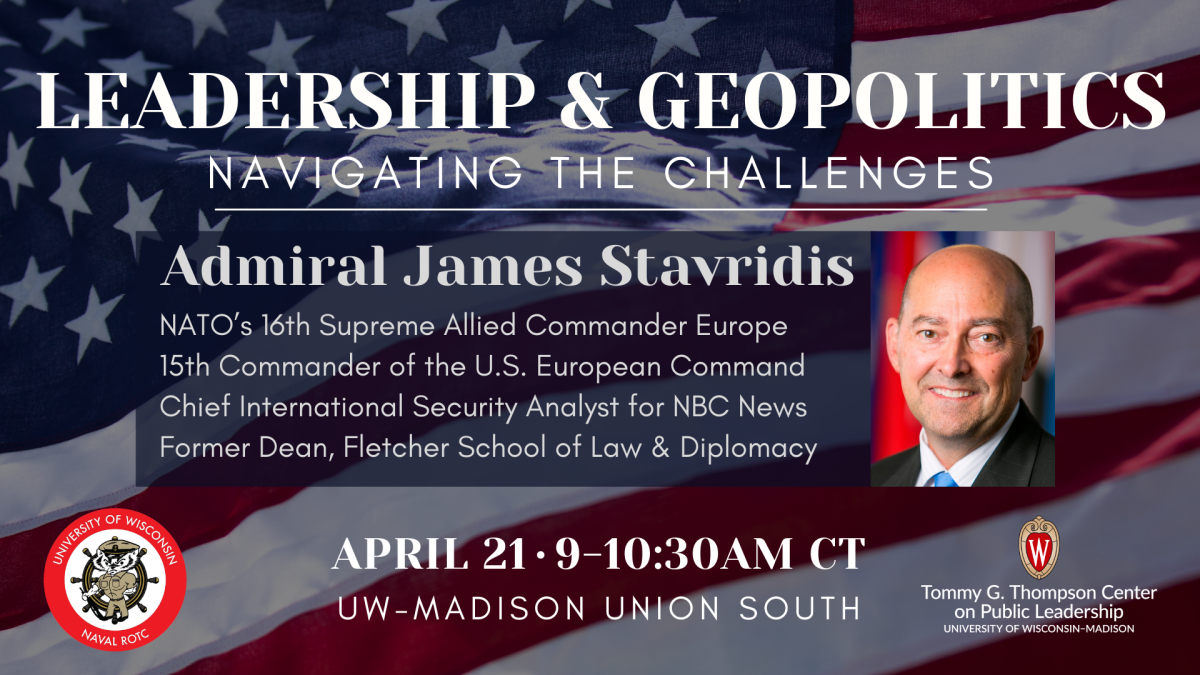 April 13, 2022: The Tommy G. Thompson Center on Public Leadership and the University of Wisconsin Naval ROTC are pleased to present Leadership and Geopolitics: Navigating the Challenges with Admiral James Stavridis. Admiral Stavridis will speak on April 21, 2022 from 9am-10:30am CT at the UW–Madison Union South in Varsity Hall II. The event is free and open to the public; no advance registration is required for this event.

Admiral Stavridis, drawing on his time as Supreme Allied Commander of NATO, will describe the roots of the war in Ukraine, beginning with a profile of Vladimir Putin based on personal experience. He will sketch out the state of the conflict, the response of the Ukrainian resistance, the role of NATO, the chances of nuclear or cyber attacks, and how larger geopolitical forces will come to bear in this tragic and very dangerous situation. Calling on his current role at one of the largest private equity firms in the world, he will assess the impact on the global economy, the efficacy of sanctions, and the role of China in the conflict. Admiral Stavridis will conclude with additional measures the west must take to maintain democracy as a viable force in this turbulent 21st century, as well as a look at potential outcomes stemming from the war in Ukraine.

Admiral James Stavridis is the Vice Chair, Global Affairs of the Carlyle Group, following five years as the 12th Dean of The Fletcher School of Law and Diplomacy at Tufts University. A retired 4-star officer in the U.S. Navy, he led the NATO Alliance in global operations from 2009 to 2013 as Supreme Allied Commander with responsibility for Afghanistan, Libya, the Balkans, Syria, counter piracy off the coast of Africa, and cyber security. He also served as Commander of U.S. Southern Command, with responsibility for all military operations in Latin America from 2006-2009. He earned more than 50 medals, including 28 from foreign nations in his 37-year military career.

Earlier in his military career he commanded the top ship in the Atlantic Fleet, winning the Battenberg Cup, as well as a squadron of destroyers and a carrier strike group – all in combat. In 2016, he was vetted for Vice President by Hillary Clinton and subsequently invited to Trump Tower to discuss a cabinet position in the Trump Administration. Admiral Stavridis earned a PhD in international relations and has published ten books, his last published in 2021 being a New York Times bestseller, and hundreds of articles in leading journals around the world, including the recent novel “2034: A Novel of the Next World War.” His 2012 TED talk on global security has over 1,000,000 hits. Admiral Stavridis is a monthly columnist for TIME Magazine and Chief International Security Analyst for NBC News.

Local media are invited and may record the first three minutes of remarks for b-roll footage with video and no audio. No other recordings by the media will be permitted.