A Conversation with Jeb Bush 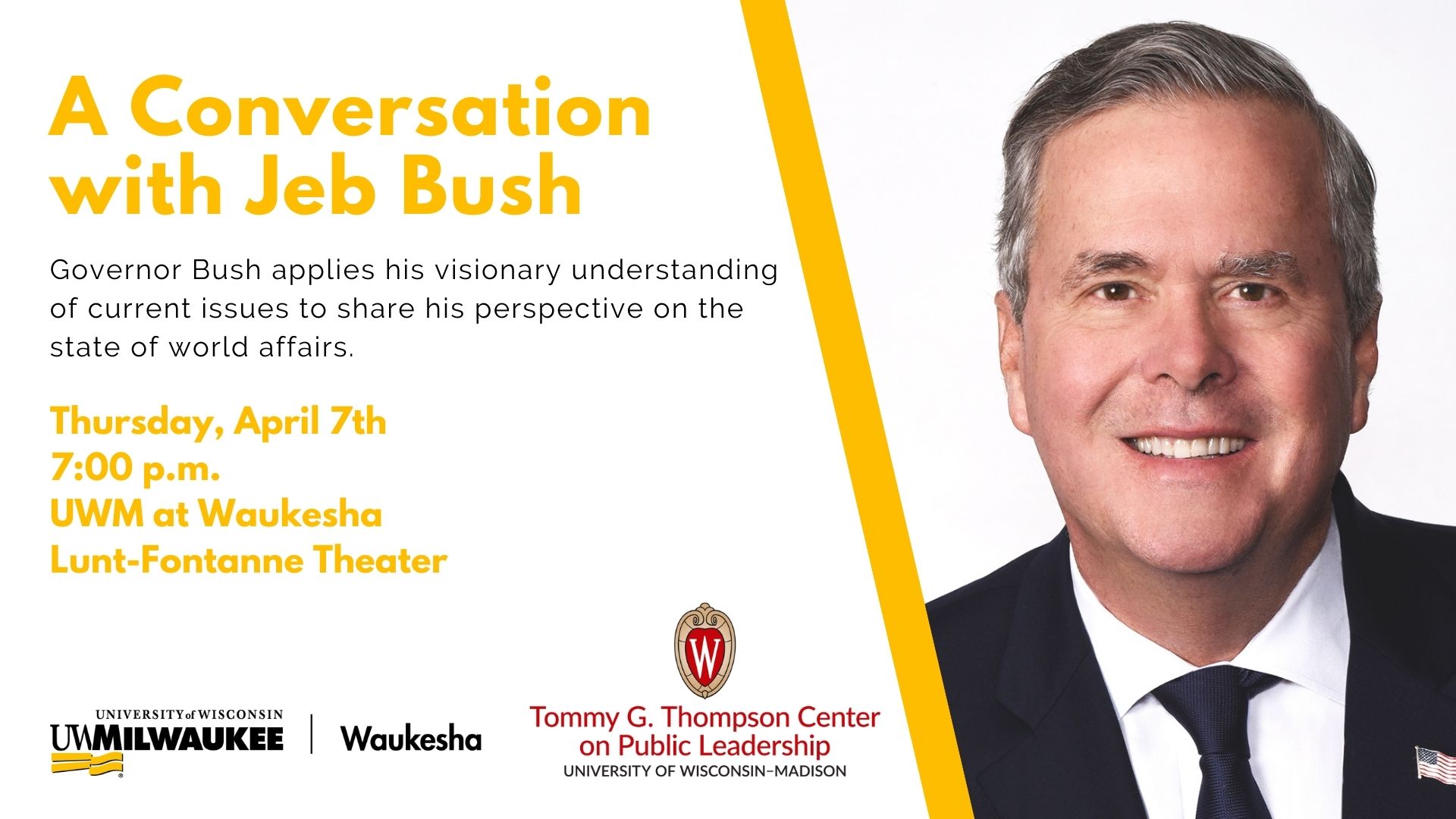 UW-Milwaukee at Waukesha and the Thompson Center hosted an evening with the former Governor of Florida, Jeb Bush. Delivering candid and informative remarks, Governor Bush shared his perspective on the state of world affairs and answered Q&A with the audience. As Governor of a battleground state, Bush has a wealth of public leadership experience and practical knowledge which led him to be the first Republican governor to win reelection in Florida state history. During his two terms, Governor Bush championed major reforms in government, ranging from health care and environmental protection to civil service, education reform, and tax reform.

Jeb Bush is the 43rd governor of the State of Florida, serving from 1999 through 2007. He was the third Republican elected to the state’s highest office and the first Republican in the state’s history to be reelected. He was most recently a candidate for the Republican presidential nomination in 2016.

During his two terms in office, he cut nearly $20 billion in taxes, vetoed more than $2.3 billion in earmarks and reduced the state government workforce by more than 13,000. His limited government approach helped create 1.3 million net new jobs and improving the state’s credit ratings, including achieving the first ever triple-A bond rating for Florida. Governor Bush championed major reform of government, in areas ranging from health care and environmental protection to civil service and tax reform. His top priority was the overhaul of the state’s failing education system. Under Governor Bush’s leadership, Florida established a bold accountability system in public schools and created the most ambitious school choice programs in the nation. Today, Florida remains a national leader in education and is one of the only states in the nation to significantly narrow the achievement gap.

Governor Bush currently serves as Chairman of Dock Square Capital LLC, a merchant bank headquartered in Miami. Governor Bush joined the University of Pennsylvania as a non-resident Presidential Professor of Practice for the 2018-19 academic year. He has previously served as a visiting professor and fellow at Harvard University, an executive professor at Texas A&M University, and has been awarded several honorary doctorates from collegiate institutions across the country. Governor Bush has been recognized for his contributions to public policy by national organizations including the Manhattan Institute, The Lynde and Harry Bradley Foundation and the Jack Kemp Foundation. Governor Bush earned a bachelor’s degree in Latin American Studies from the University of Texas at Austin and moved to Florida in 1981. With partner Armando Codina, he started a small real estate development company, which grew to become the largest, full-service commercial real estate company in South Florida.

Governor Bush previously served as Florida’s Secretary of Commerce under Bob Martinez, Florida’s 40th governor. As Secretary of Commerce, he promoted Florida’s business climate worldwide. Following an unsuccessful bid for governor in 1994, he founded the nonprofit Foundation for Florida’s Future, which joined forces with the Urban League of Greater Miami to establish the state’s first charter school. Governor Bush maintains his passion for improving the quality of education for students across the country by serving as the Chairman of the Foundation for Excellence in Education, a national nonprofit education reform organization he founded to transform education in America. He has written three books, Profiles in Character; Immigration Wars: Forging an American Solution; and Reply All: A Governor’s Story 1999-2007. Governor Bush lives in Miami with his wife Columba. They have three children and four grandchildren.

If you are a UW student, staff, or faculty member and would like to view a recording of the event, email us at thompsoncenter@wisc.edu