Academic Freedom in the Digital Age 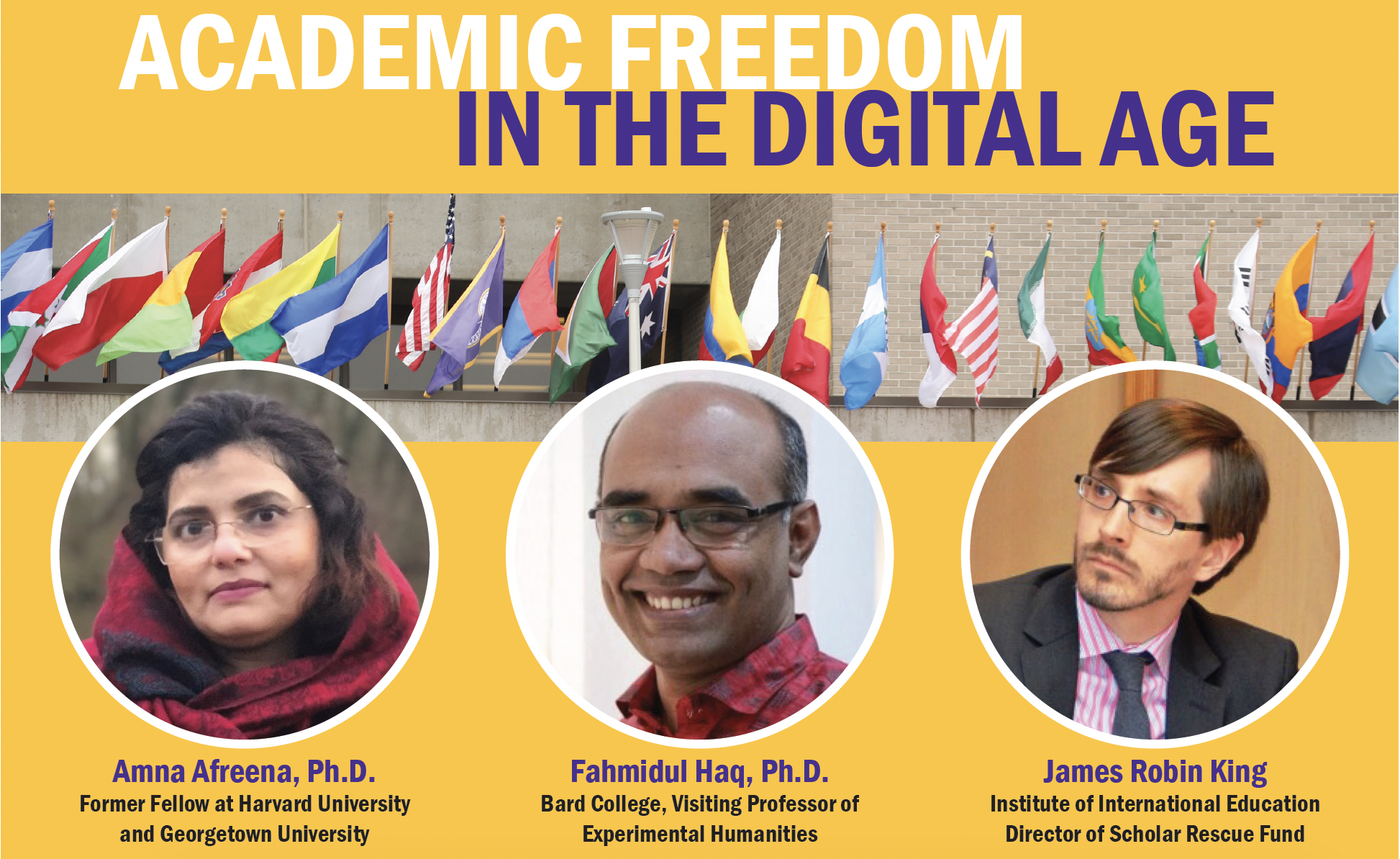 Join educators, students, business and community leaders, and community members interested in learning more about academic freedom as the UW-Stevens Point School of Education welcomes a panel of international scholars to discuss “Academic Freedom in the Digital Age” on Thursday, April 14, 2022. The presentation will be held in the Dreyfus University Center Theater at 5 p.m. and simulcast at the UWSP branch campuses in Marshfield (Rm. 131) and Wausau (Veninga Theater in the Center for Civic Engagement).

The erosion of academic freedom poses a major threat to democracy around the world. Scholar Rescue Fund (SRF) is the only global program that arranges and funds fellowships for threatened and displaced scholars at partnering higher education institutions worldwide. James King, director of SRF, will explain the importance of academic freedom and what is happening in the world. He will share how SRF builds a new academic life for displaced academics all over the world. He also will provide some strategies to help displaced scholars with building a new academic career in this country.

Fahmidul Haq and Amna Afreena are two IIE-SRF scholars who have directly experienced the effects of academic freedom violations from different countries. They will share what they have experienced and struggles they have been going through.

Amna Afreena has a Ph.D. in Islamic Studies from University of Karachi. She taught Islamic Studies and Urdu for four years at a college in Karachi. During her fellowship at Harvard and Georgetown, Afreena did research about curriculum Reform in Pakistan and diversity.

James Robin King is director of the Scholar Rescue Fund (SRF), an Institute of International Education (IIE) program that assists professors who face threats to their lives and careers. A former Fulbright Fellow in Jordan, King holds a master’s in Islamic Studies from Columbia University and has published extensively on Yemen, including original research on Yemen’s Zaydi community through a research grant with the American Institute for Yemeni Studies. He is also the co-author of two reports published by IIE and the University of California, Davis that focus on the impact of the Syrian refugee crisis on higher education: “We Will Stop Here and Go No Further: Syrian University Students and Scholars in Turkey” and “The War Follows Them: Syrian University Students and Scholars in Lebanon.” King worked on a state stabilization initiative in Yemen and on a project to measure the quality of governance within contemporary Muslim-majority states.

Visiting Professor of Experimental Humanities at Bard College, Fahmidul Haq was Visiting Research Professor of film at University of Notre Dame for two years. He taught Mass Communication and Journalism at University of Dhaka, Bangladesh for nearly two decades. His areas of interests include Critical Media Studies, Film Studies and New Media Culture. He has published several books and papers on South Asian film and media both in English and Bengali. His current book project related to identity politics on screen is forthcoming from Routledge. A human rights defender and public intellectual Haq’s online activism evolves around culture and politics of Bangladesh.

Uzi Ogurlu, Ph.D., is an assistant professor of Gifted Education in the School of Education at UW-Stevens Point. Previously, He worked at Lamar University in Texas, Harvard University, and a college in Turkey. He has written various articles and chapters on gifted education and creativity. His research interests are talent development, creativity, the social and emotional life of gifted students and diversity in education.

Erin Redman, Ph.D., is an assistant professor of Educational Sustainability in the School of Education at UW-Stevens Point. Prior to joining UWSP, she worked at Leuphana University of Luneburg in Germany on an international sustainability education collaboration for the Global Consortium of Sustainability Outcomes (GCSO).

Lynda Fernholz, Ph.D., is a professor of Reading/Language Arts and assistant dean in the School of Education at UW-Stevens Point. Fernholz is an active member of Wisconsin/Nicaragua Partners non-profit organization. She has been involved in several Nicaraguan Literacy Projects and is an active philanthropist for several charitable organizations to promote sustainable literacy practices for all children worldwide. Her research interests include sustainable literacy education and global experiences for pre-service teachers to meet the needs of culturally and linguistically diverse learners in today’s classrooms.