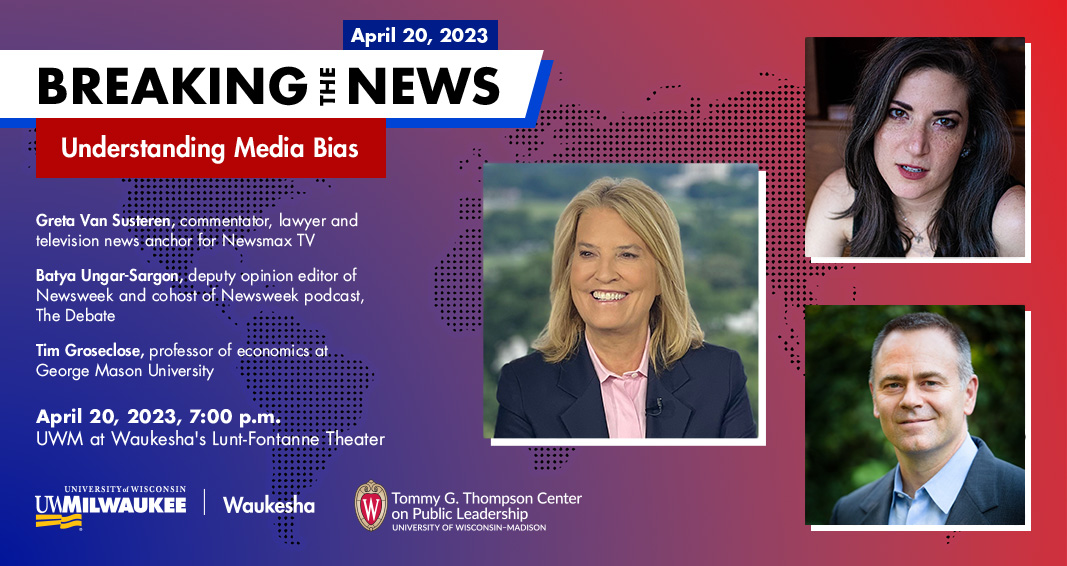 Understanding different perspectives and knowing political views of media outlets can allow a more balanced and full picture of media consumption. However media bias has been ever growing and can lead to manipulation and  mistrust of news sources.  Join Greta Van Susteren, Batya Ungar-Sargan and Tim Groseclose at the UW-Milwaukee Waukesha Campus for a discussion about Understanding Media Bias in the current state of affairs. Sponsored by the Tommy Thompson Center on Public Leadership.

Greta Van Susteren
Former anchor at CNN, Fox News Channel and MSNBC. She spent about 7 years at CNN, hosting two shows, before moving over to Fox News Channel in 2002 where she anchored the prime time show ON THE RECORD for 14 1/2 years. ON THE RECORD remained the highest rated cable news program in its prime time slot for the entire 14 1/2 years. She is currently the host of “The Record with Greta Van Susteren,” a news show on Newsmax TV that airs daily at 6pm eastern. The show broadcasts across the USA and is available on multiple platforms (cable,satellite,streaming.). Van Susteren received her BA with distinction in Econimics from the University of Wisconsin – Madison. She earned a Juris Doctor from Georgetown Law Center in 1979 and a Master of Laws from Georgetown Law Center in 1982.

Batya Ungar-Sargan
Deputy opinion editor of Newsweek. Before that, she was the opinion editor of the Forward, the largest Jewish media outlet in America. She has written for the New York Times, the Washington Post, Foreign Policy, Newsweek, the New York Review of Books Daily, and other publications. She has appeared numerous times on MSNBC, NBC, the Brian Lehrer Show, NPR, and at other media outlets. She holds a PhD from the University of California, Berkeley and is author of the upcoming book Bad News: How Woke Media Is Undermining Democracy.

Tim Groseclose
Professor of economics at George Mason University and the holder of the Adam Smith chair at the Mercatus Center. He has held previous faculty appointments at UCLA, Caltech, Stanford University, Ohio State University, Harvard University, and Carnegie Mellon University.
In 1987 Groseclose received his B.S. degree in Mathematical and Computational Sciences from Stanford University. In 1992 he received his PhD from the Stanford Graduate School of Business (specializing in the School’s Political Economics program).
His research has focused on Congress, the media, and mathematical models of politics. He has recently published two books, Cheating: An Insider’s Report on the Use of Race in Admissions at UCLA and Left Turn: How Liberal Media Bias Distorts the American Mind. He has published more than two dozen scholarly articles, including several published in the American Economic Review, Quarterly Journal of Economics, American Political Science Review, American Journal of Political Science, and Journal of Politics.