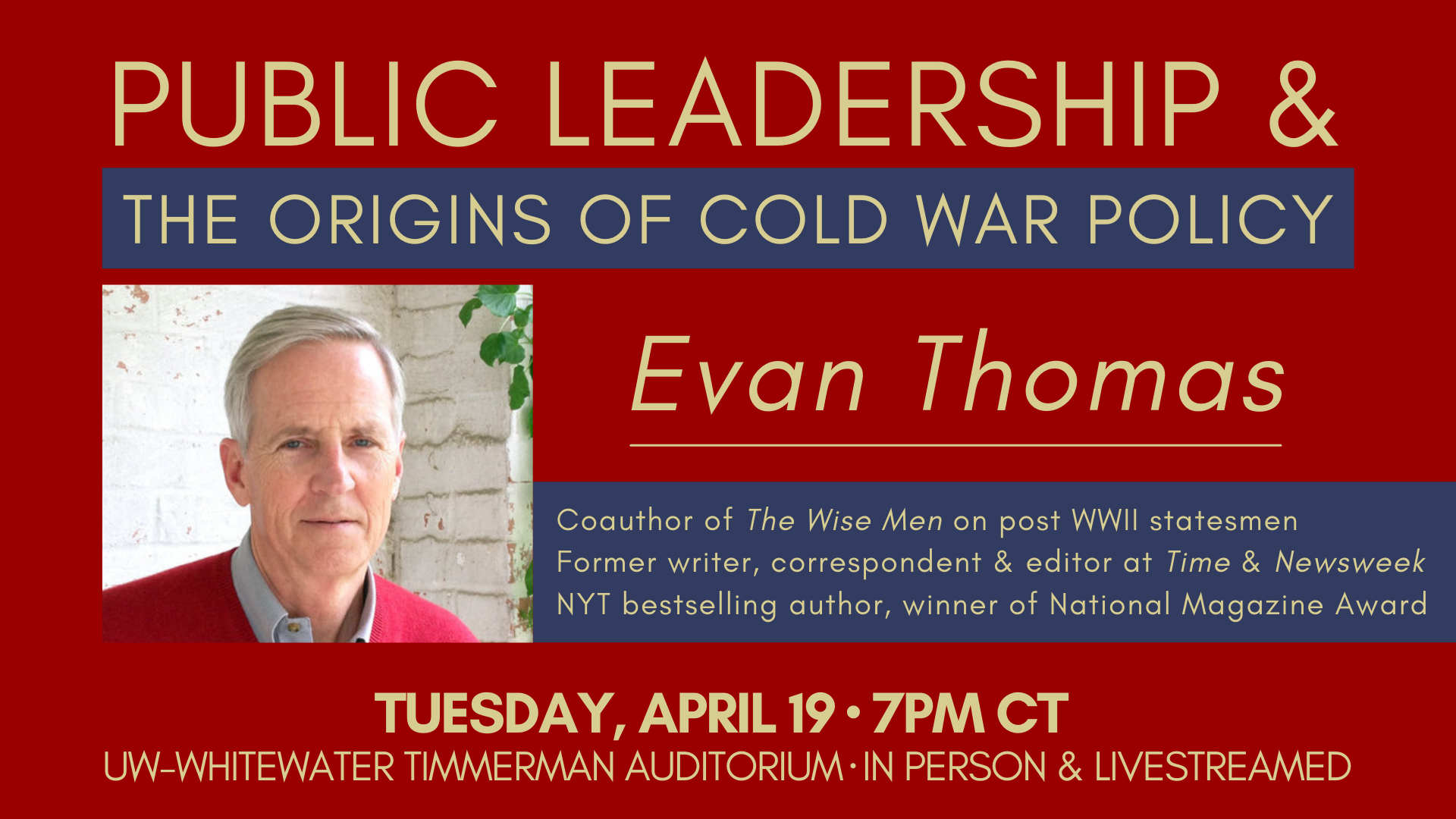 The Thompson Center and UW–Whitewater Departments of History and Political Science hosted an evening with bestselling author and journalist Evan Thomas. Thomas addressed the origins of Cold War policy, especially drawing on his work, The Wise Men, an account of the American statesmen who rebuilt the world after the catastrophe of World War II and left a legacy that dominates American policy to this day. The event was held on Tuesday, April 19 from 7-8:30pm at the UW–Whitewater Timmerman Auditorium in Hyland Hall. The event was livestreamed for a virtual audience. All Thompson Center events are free and open to the public.

About Evan Thomas: Evan Thomas is the author of ten books, including The Wise Men (with Walter Isaacson), The Man to See, The Very Best Men, Robert Kennedy, John Paul Jones, Sea of Thunder, The War Lovers, Ike’s Bluff, Being Nixon, and First: Sandra Day O’Connor. John Paul Jones, Sea of Thunder and First were all top fifteen New York Times bestsellers. Thomas was a writer, correspondent, and editor for thirty three years at Time and Newsweek, including ten years (1986–96) as Washington bureau chief at Newsweek, where, at the time of his retirement in 2010, he was editor at large. He wrote more than one hundred cover stories and in 1999 won a National Magazine Award. He wrote Newsweek’s fifty-thousand-word election specials in 1996, 2000, 2004 (winner of a National Magazine Award), and 2008. He has appeared on many TV and radio talk shows, including Meet the Press and The Colbert Report, and was a guest on PBS’s Charlie Rose more than forty times. The author of dozens of book reviews for The New York Times and The Washington Post, Thomas taught writing and journalism at Harvard and Princeton, where, from 2007 to 2014, he was Ferris Professor of Journalism. His latest book, Surrender: A Story of Three Men and the Atom Bomb, will be published by Random House in 2023.

In The Wise Men, Thomas and Isaacson share the stories of Averell Harriman, the freewheeling diplomat and Roosevelt’s special envoy to Churchill and Stalin; Dean Acheson, the secretary of state who was more responsible for the Truman Doctrine than Truman and for the Marshall Plan than General Marshall; George Kennan, self-cast outsider and intellectual darling of the Washington elite; Robert Lovett, assistant secretary of war, undersecretary of state, and secretary of defense throughout the formative years of the Cold War; John McCloy, one of the nation’s most influential private citizens; and Charles Bohlen, adroit diplomat and ambassador to the Soviet Union.