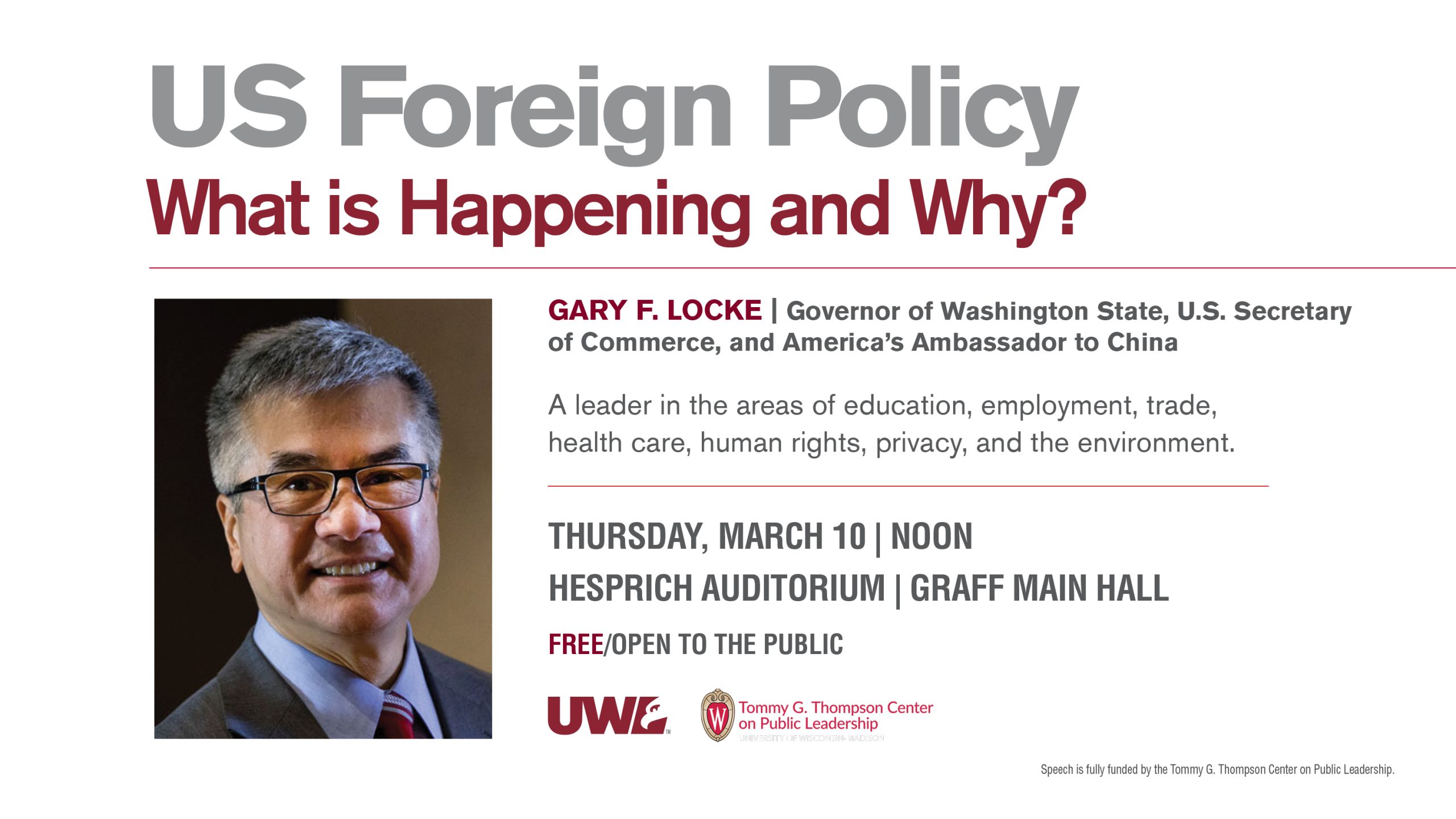 While we may read the news, understanding international matters requires an exploration of the history and politics between countries. Gary Locke, a former diplomat, cabinet member, and governor, explored what is happening in U.S. foreign policy, including U.S.-China and U.S.-Russia relations, in the challenging present-day context. Locke was the first Chinese-American to be elected governor in U.S. history. He served as Governor of Washington State (1997-2005), U.S. Ambassador to the People’s Republic of China (2011-2014), and U.S. Secretary of Commerce (2009-2011).

The lecture and Q&A, sponsored by the Tommy G. Thompson Center on Public Leadership, took place at noon CT Thursday March 10, at Hesprich Auditorium, on the 2nd floor of Graff Main Hall. The lecture was free and open to the public.

Coverage of the event can be found at WXOW, News8000, and WIZM news.

Gary Locke has been a leader in the areas of education, employment, trade, health care, human rights, privacy and the environment. As Washington’s 21st governor, in the nation’s most trade dependent state, Locke increased exports of Washington State products and services by leading trade missions to Mexico, Europe, and Asia. He more than doubled the state’s exports to China. During his tenure, he achieved bipartisan welfare reform and oversaw the gain of 280,000 private sector jobs, despite two national recessions. Locke also had the most diverse cabinet in state history. More than half his judicial appointments were women and 25% were people of color. His management skills and innovations in government efficiency have won him acclaim by nationally-recognized authors and organizations, including Harvard’s Kennedy School of Government. During his tenure, Washington was ranked one of America’s four best managed states.

As Secretary of Commerce, Locke led President Obama’s National Export Initiative to double American exports; assumed a troubled 2010 census process, which under his active supervision, ended on time and $2 billion under budget; and achieved the most significant reduction in patent application processing in the agency’s history: from 40 months down to one year.

As Ambassador to China from 2011-2014, Locke opened markets for made-in-USA goods and services; reduced wait times for visa interviews of Chinese applicants from 100 days to three days; and through the Embassy’s air quality monitoring program, exposed the severity of the air pollution in China, causing the Chinese people to demand action by the government and the government in turn to begin addressing the issue. Locke is chairman of Locke Global Strategies, providing strategic advice and consulting services to businesses in the U.S. and China across a spectrum of issues including international trade. He is also a senior advisor and consultant for the Davis Wright Tremaine law firm where he consults with DWT’s domestic and international clients in several areas, including trade, regulatory, and investment issues from local to international levels. He is the proud father of Emily, Dylan, and Madeline.