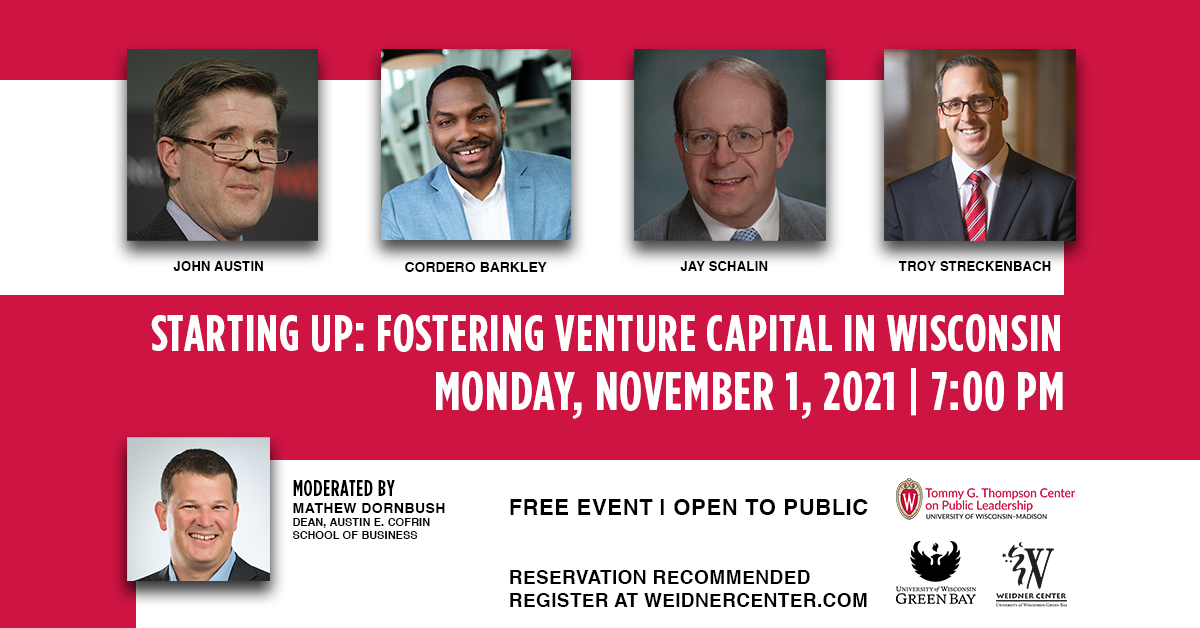 The Tommy G. Thompson Center on Public Leadership, UW–Green Bay Weidner Center for the Performing Arts, and UW-Green Bay Austin E. Cofrin School of Business presented Starting Up: Fostering Venture Capital in Wisconsin on Monday, November 1, 2021 at 7:00 PM at the Weidner Center for the Performing Arts. This hybrid event featured a discussion panel with community leaders and national experts on fostering venture capital in Wisconsin.

John Austin recently completed 16 years elected service on the Michigan State Board of Education, serving 6 years as President. Austin directs the Michigan Economic Center (www.MECReports.org) a center for ideas and network-building to advance Michigan’s economic transformation. He also serves as a Non-Resident Senior Fellow with the Brookings Institution, the Chicago Council on Global Affairs, and the Upjohn Institute where he leads these organizations efforts to support economic transformation in the American Midwest. Mr. Austin also Lectures on the Economy at the University of Michigan. Austin received his Master’s in Public Administration from Harvard’s Kennedy School of Government, and a Bachelors from Swarthmore College in Economics & Political Science, with High Honors and Phi Beta Kappa.

Cordero Barkley is the director of finance and investments at Titletown Tech. He was previously an assistant vice president – fiduciary officer with Associated Bank Wealth Management. Barkley is an alum of University of Wisconsin-Green Bay where he earned both bachelor’s and master’s degrees and played Division I basketball from 2005-2009. In 2018, he was recognized by the Green Bay Chamber of Commerce as a Future 15 recipient, and received UW-Green Bay Distinguished Recent Alumni Award for 2018. He also currently serves on a number of boards in the Greater Green Bay community.

Jay Schalin joined the Martin Center for Academic Renewal in August 2007. A Philadelphia native, he began his writing career as a freelance journalist for the Asbury Park Press in New Jersey and wrote for several other papers in New Jersey and Delaware. He also worked as a software engineer for Computer Sciences Corporation. Schalin has a B.S. in computer science from Richard Stockton College in New Jersey and an M.A. in economics from the University of Delaware. His articles have appeared in Forbes, The Washington Times, Fox News Online, U.S. News and World Report, Investor’s Business Daily, The Imaginative Conservative, Human Events, and American Thinker. His op-eds have been published by the McClatchy News Service and Raleigh’s News & Observer. He has been interviewed on ESPN, National Public Radio, and UNC-TV, and his work has been featured on ABC News and Fox News’ The O’Reilly Factor.

Troy Streckenbach is a life-long resident of Brown County. He introduced the Debt Reduction, Infrastructure and Property Tax Relief Plan in 2017 and this landmark initiative was overwhelmingly approved by the Brown County Board of Supervisors, along with business and community leaders alike. During his most recent budget, the plan allowed for the largest property tax cut in decades while paying down the county’s outstanding debt to under $60 million. Streckenbach has led the charge in paying off over $86 million in total debt since taking office in 2011. Streckenbach is focused on rebuilding Brown County’s economy by creating an environment that retains and encourages business development in Northeast Wisconsin. In addition, Streckenbach’s vision for the future has produced concepts to attract 21st Century investment in the new economy. With the benefit of Brown County’s fiber infrastructure Streckenbach created hub zones to attract entrepreneurs to localized areas, while promoting the Digital Counties Symposium in 2019 to help shape future conversations surrounding Blockchain, AI and the Internet of Things. Streckenbach was the lead advocate for Brown County’s STEM Innovation Center, UW-Green Bay’s new engineering school and the Flight of Champions Honor Flight at Austin Straubel. Most recently, Streckenbach celebrated the grand opening of the Resch Expo, a $93 million state-of-the-art facility. Streckenbach brings a fresh approach to Brown County government. His background as a businessman gives him the strong management skills and fiscal discipline with which he has effectively governed Brown County.