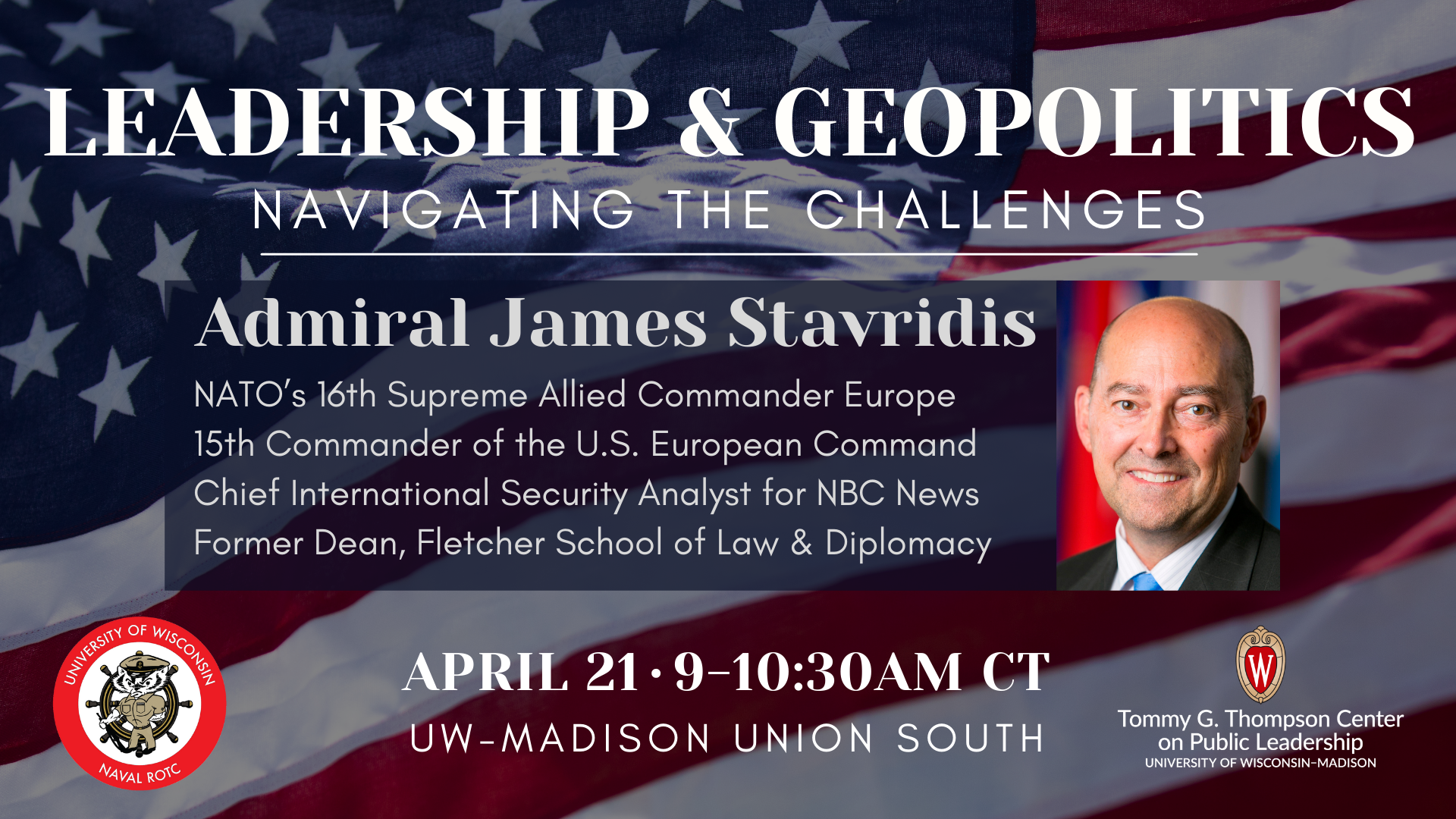 The Tommy G. Thompson Center on Public Leadership and University of Wisconsin Naval ROTC were pleased to present Leadership and Geopolitics: Navigating the Challenges with Admiral James Stavridis. Admiral Stavridis spoke on April 21, 2022 from 9am-10:30am CT at the UW–Madison Union South in Varsity Hall II. The event was free and open to the public. If you are interested in viewing the recording after the event, please email us at thompsoncenter@wisc.edu.

Admiral Stavridis, drawing on his time as Supreme Allied Commander of NATO, described the roots of the war in Ukraine, beginning with a profile of Vladimir Putin based on personal experience. He sketched out the state of the conflict, the response of the Ukrainian resistance, the role of NATO, the chances of nuclear or cyber attacks, and ultimately how larger geopolitical forces will come to bear in this tragic and very dangerous situation. Calling on his current role as Vice Chair, Global Affairs of The Carlyle Group, one of the largest private equity firms in the world, he assessed the impact on the global economy, the efficacy of sanctions, and the role of China in the conflict. Admiral Stavridis concluded with some additional measures the west must take to maintain democracy as a viable force in this turbulent 21st century, as well as potential outcomes stemming from the war in Ukraine.

Admiral James Stavridis is Vice Chair, Global Affairs of The Carlyle Group and Chair of the Board of Trustees, Rockefeller Foundation.

A Florida native, Jim Stavridis attended the US Naval Academy at Annapolis, and spent 37 years in the Navy, rising to the rank of 4-star Admiral. Among his many commands were four years as the 16th Supreme Allied Commander at NATO, where he oversaw operations in Afghanistan, Libya, Syria, the Balkans, and counter piracy off the coast of Africa. He also commanded US Southern Command in Miami, charged with military operations through Latin America for nearly three years. He was the longest serving Combatant Commander in recent US history. Following his military career, he served for five years as the 12th Dean of The Fletcher School of Law and Diplomacy at Tufts University.

In the course of his career in the Navy, he served as senior military assistant to the Secretary of the Navy and the Secretary of Defense. He led the Navy’s premier operational think tank for innovation, Deep Blue, immediately after the 9/11 attacks. Admiral Stavridis was promoted directly from 1-star rank to 3-star rank in 2004. He won the Battenberg Cup for commanding the top ship in the Atlantic Fleet and the Navy League John Paul Jones Award for Inspirational leadership, along with more than 50 US and international medals and decorations, including 28 from foreign nations. He also commanded a Destroyer Squadron and a Carrier Strike Group, both in combat.

In 2016, he was vetted for Vice President by Secretary Hillary Clinton, and subsequently invited to Trump Tower to discuss a cabinet position with President Donald Trump.

He earned a PhD from The Fletcher School at Tufts, winning the Gullion prize as outstanding student in his class in 1983, as well as academic honors from the National and Naval War Colleges as a distinguished student. He speaks Spanish and French. Admiral Stavridis has published ten books on leadership, the oceans, maritime affairs, and Latin America, as well as hundreds of articles in leading journals. An active user of social networks, he has tens of thousands of connections on the social networks. His TED talk on 21st century security in 2012 has close to one million views. He tweeted the end of combat operations in the Libyan NATO intervention. His two most recent books are “Sailing True North: Ten Admirals and the Voyage of Character” in 2019 and the novel “2034: A Novel of the Next World War” in 2021, which was a New York Times bestseller.

Admiral Stavridis is a contributing editor for TIME Magazine and Chief International Security and Diplomacy Analyst for NBC News.