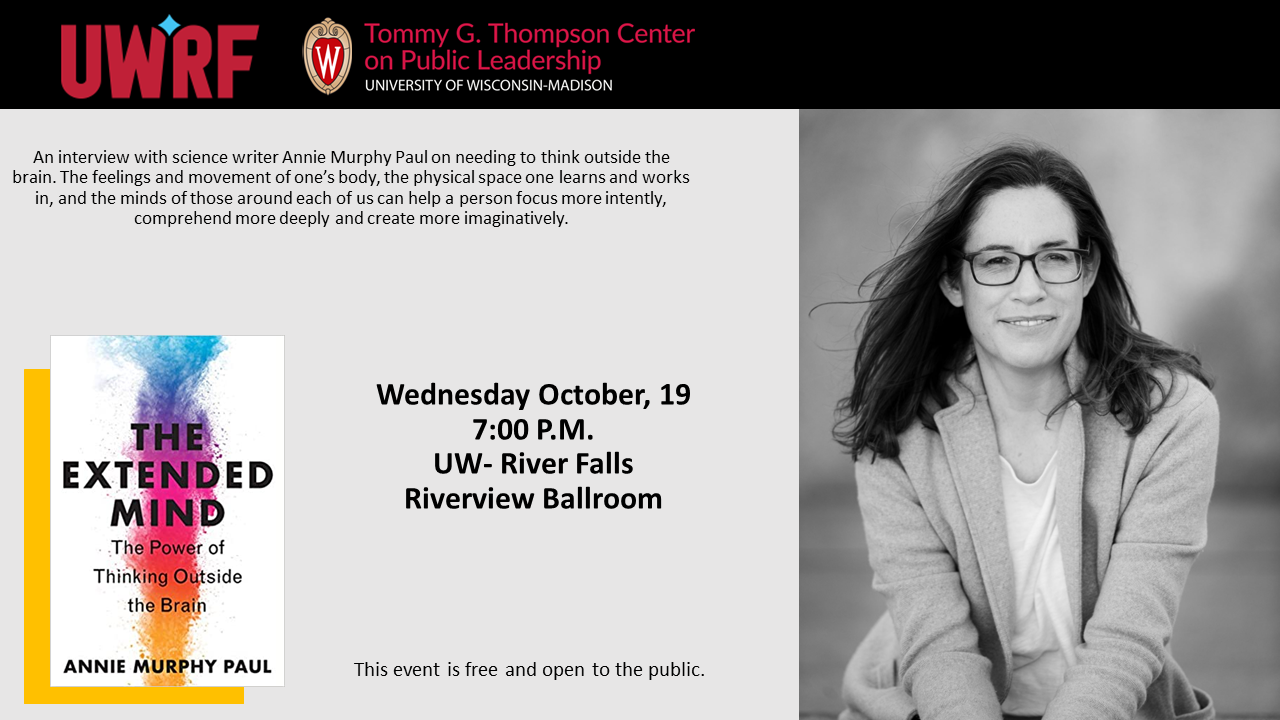 Annie Murphy Paul is an acclaimed science writer whose work has appeared in the New York Times Magazine, Scientific American and The Best American Science Writing and many other publications. Her latest book is “The Extended Mind: The Power of Thinking Outside the Brain.” Published in June 2021, it was selected as Amazon Editors’ Pick for Best Nonfiction; one of 50 Notable Works of Nonfiction by the Washington Post; and one of 100 Notable Books by the New York Times. Paul is the author of “Origins,” also named by The New York Times as a Notable Book, and “The Cult of Personality,” hailed by Malcolm Gladwell in the New Yorker as a “fascinating new book.” Her TED Talk has been viewed more than 2.6 million times. Paul is a recipient of the Rosalynn Carter Mental Health Journalism Fellowship, the Spencer Education Journalism Fellowship, and the Bernard L. Schwartz Fellowship at New America. A graduate of Yale University and Columbia University Graduate School of Journalism, she is currently a Learning Sciences Exchange Fellow at New America. The Tommy G. Thompson Center on Public Leadership and the Chancellor and Provost Offices of UW-River Falls are excited to host this interview before the Inauguration of UW-River Falls Chancellor, Maria Gallo.

About the book, “The Extended Mind: The Power of Thinking Outside the Brain”

That is what we tell ourselves when facing a tricky problem or a difficult project. A growing body of research indicates that we have it exactly backward. What we need to do, says acclaimed science writer Annie Murphy Paul, is think outside the brain. A host of “extra-neural” resources—the feelings and movements of our bodies, the physical spaces in which we learn and work, and the minds of those around us— can help us focus more intently, comprehend more deeply and create more imaginatively.

“The Extended Mind: The Power of Thinking Outside the Brain” outlines the research behind this exciting new vision of human ability, exploring the findings of neuroscientists, cognitive scientists and psychologists, and examining the practices of educators, managers, and leaders who are already reaping the benefits of thinking outside the brain. She excavates the untold history of how artists, scientists and authors—from Jackson Pollock to Jonas Salk to Robert Caro—have used mental extensions to solve problems, make discoveries and create new works. In the tradition of Howard Gardner’s “Frames of Mind” or Daniel Goleman’s “Emotional Intelligence,” The Extended Mind offers a dramatic new view of how our minds work and is full of practical advice on how we can all think better