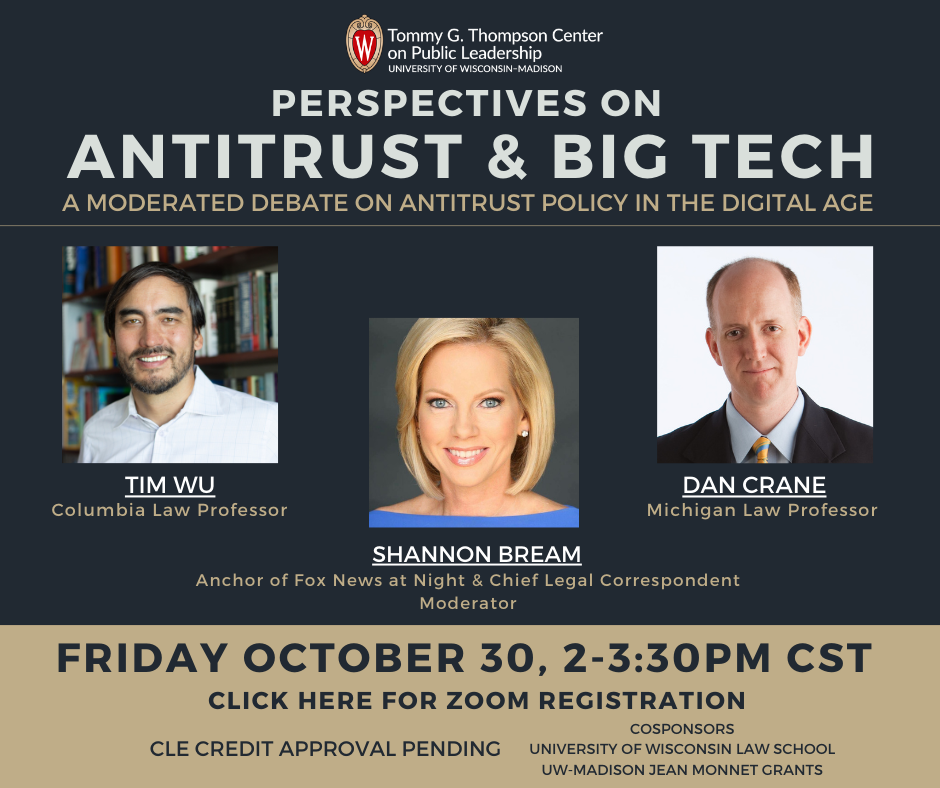 The Tommy G. Thompson Center was pleased to present a virtual debate on antitrust policy in the digital age. Legal experts Timothy Wu and Daniel Crane offered competing perspectives on the regulation of economic power with respect to big tech, moderated by Fox News @ Night anchor Shannon Bream. Topics covered included the legal history of American antitrust policy, consumer welfare standard, the growth of big tech, the ongoing regulation and oversight activities of national governments, and how this debate might play out in the years ahead.

Timothy Wu is Julius Silver Professor of Law, Science and Technology at Columbia Law School and Advisory Board Member of the Open Markets Institute. A Silicon Valley veteran and New York Times contributing writer, he is best known for coining the term “net neutrality” before it became a federal law. He is the author of The Curse of Big-Ness, The Attention Merchants, Who Controls the Internet? and The Master Switch.

Shannon Bream is the anchor of Fox News @ Night, the network’s Chief Legal Correspondent, and a regular guest host for top-rated programs such as Special Report and Fox News Sunday. Before entering the world of media, she was a lawyer specializing in race discrimination and sexual harassment cases. She is an Honors graduate of the Florida State University College of Law and obtained her B.S. in Business Management.

Cosponsors of this webinar were the University of Wisconsin Law School and the UW-Madison Jean Monnet Grants. Approved for 1.5 CLEs.