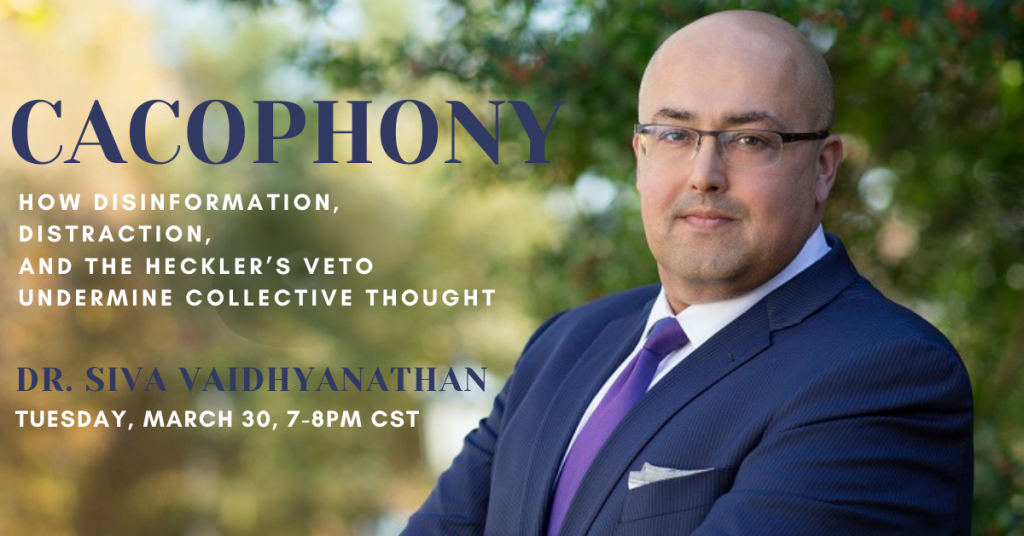 The Thompson Center and UW-Whitewater were pleased to welcome Dr. Siva Vaidhyanathan. A cultural historian, media scholar, and lecturer, Dr. Vaidhyanathan serves as the Robertson Professor of Media Studies and the director of the Center for Media and Citizenship at the University of Virginia. He is a frequent contributor on media and cultural issues on public radio shows and news programs, notably the BBC, CNN and NBC. Siva has also authored several books, including The Googlization of Everything (And Why We Should Worry) and Antisocial Media: How Facebook Disconnects Us and Undermines Democracy (Oxford University Press, 2018). His articles have appeared in The New Yorker, The New York Times, The Washington Post, The Guardian and The Nation. Dr. Vaidhyanathan’s current project reflects major societal concerns related to the “global media ecosystem,” but touches on such issues as the prevalence of propaganda and misinformation (and its easy dissemination on social media) which further threatens to undermine democracy and destabilize governments across the world. Moreover, the lecture considers the importance of news and information literacy, which is fundamentally one of the most important issues of our time in an age when expertise and intellectualism is under attack. This event was cosponsored by the UW-Madison American Enterprise Institute Executive Council.