Political strategists and former presidential advisors David Axelrod and Karl Rove will be holding a point-counterpoint conversation at UW-Green Bay, sponsored by the Tommy G. Thompson Center on Public Leadership. The event will be moderated by Mike Gousha, a distinguished fellow in law and public policy at Marquette University Law School. This event is designed to provide and promote civil, non-partisan and thought provoking conversations about election polling and strategy, about politicians and presidents, about red and blue culture, and also the state of our democracy, the media and more. 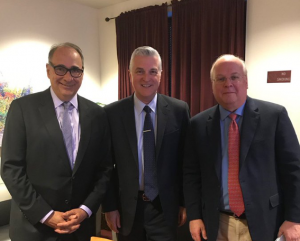 David Axelrod is a preeminent American political strategist and commentator and former chief strategist and senior advisor to President Barack Obama. Axelrod currently serves as the director of the non-partisan Institute of Politics at the University of Chicago. Axelrod additionally hosts a podcast the Axe Files which features in-depth conversations with public figures across the political spectrum. A televised version of the show airs monthly on CNN. A former political writer for the Chicago Tribune, Axelrod produced media strategy and advertising for 150 campaigns across the U.S., culminating in President Obama’s historic elections. Axelrod is also the author of The New York Times best-selling memoir, Believer: My Forty Years in Politics.

With over four decades of experience in the political arena, Karl Rove is an iconic strategist whose provocative and robust knowledge of the major issues of the day have made him one of the most sought-after commentators of our time. Rove has been described by author and columnist Michael Barone as, “unique…no presidential appointee has ever had such a strong influence on politics and policy, and none is likely to do so again anytime soon,” and Fred Barnes, Executive Editor of the Weekly Standard as “the greatest political mind of his generation and probably of any generation…He knows history, understands the moods of the public, and is a visionary on matters of public policy.”

Moderator Mike Gousha serves as a distinguished fellow in law and public policy at Marquette University Law School. An award-winning journalist, Gousha explores important public policy issues through his work at the Lubar Center for Public Policy Research and Civic Education. He is the host of the Law School’s “On the Issues” conversation series, and has been the sole moderator of numerous political debates held at the Law School, including the final debate of Wisconsin’s historic 2012 recall election for Governor.

The UW-Green Bay event exemplified the Center’s mission to bring important conversations and highlight successful public leaders to communities across Wisconsin. We are excited to hold this on-campus event in a community that is bustling with innovation, growth and emerging public leaders. Fox News 11 and ABC 2 aired stories on the event.

A word from UW-Green Bay Chancellor Gary Miller: “Universities are places of discovery and conversation around important topics that foster the development of leaders. We are proud to welcome these distinguished thought leaders to our campus to be a part of the public discourse at this critical time in our nation’s history.”